I live in a suburban part of town. There’s lots of houses close together, though some of us have good sized backyards. It’s a quiet place with a little hint of mother nature — birds, squirrels, and some rabbits. Maybe a skunk and a woodchuck once in awhile. I live within about 400 feet of Route 110, and close to its busy intersection with Main Street. There’s no boonies here in this neighborhood, although there’s a swamp and some woods.

My cat loves being outside at night, and I used to oblige him. At least, up until I got a wildlife camera with an infrared setting and started filming what goes on at night in the backyard.

Turns out I really had no clue just how wild the backyard really is. Here’s a few photos from the wildlife ca 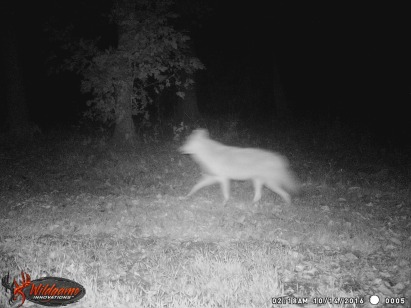 m to prove it.

The camera is secured to a fencepost at the edge of my garden, about 200 feet or so from the house. There’s a light wooded area that it looks out on, but otherwise it’s surrounded by lawn.

The photo I posted at the top of the blog is one of the very few daytime photos that I managed to get. It’s a full sized doe that has been coming to our yard for months, occasionally jumping over my garden fence and raiding it until I figured out how to keep it out (that’s the subject of another blog).

The first nighttime photo I’ve posted here is what appears to be a lone coyote. That’s a surprise to me, because I’ve never heard a coyote howl in all the years (23) that I’ve lived in this neighborhoo 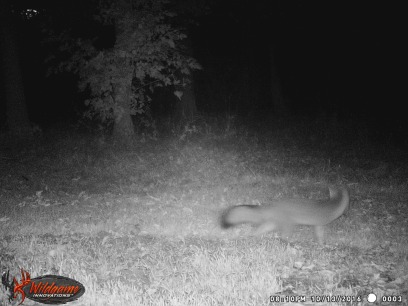 Next up is what I think is a fisher cat. And that’s probably the worst of the backyard critters. These creatures are known of their ferocity and hunting prowess. They will attack all sorts of domestic animals, such as chickens and cats.  I heard its strange, child-like howls the same night that the camera snapped its photo.

The third photo is a fox. Another prowler who likes domesticated animals. I’ve never seen one in this neighborhood during the daytime.

Next up is a new visitor — a 6-point buck. I’ve seen him around the backyard at dusk a few times, but the wildlife camera showed me that he’s here every night, visiting and revisiting multiple times each night. I have dozens of photos of him. He’s very bold and brash, and I’m surprised that he’s managed to live here so successfully. There are busy roads all around us, including Interstate 495, yet somehow he’s managed to s

The last photo, which is posted at the end of this blog, is the most satisfying. The doe that I photographed last summer seemed to disappear after awhile. I feared the worst had happened. But one night, the wildlife cam captured a fuzzy but interesting shot — there she was, accompanying the 6-point buck. Maybe next year I’ll be recording photos of the two of them and their  fawn.

Oh and the cat’s nighttime escapades are over. I bring him inside every night now that I know just how wild the backyard is at night.

One thought on “The secret life of a backyard at night”

This site is optimized to your device.